Following the previous article, I will continue to explain how our lost RC beacon works, especially the firmware of the receiver module. At the end of the post, a video shows how to find a lost RC model in real conditions.

Let's recap the main design of the receiver module first. We use a DRA886RX that receives the signal transmitted by the TX beacon. The output of this chip is a digital signal that can for example be used to drive a buzzer through a transistor. But doing this is a punishment for our ears because if there is no radio signal, the receiver output can randomly be 0 or 1... as a result it will output an high level noise.

The first (bad) idea to avoid this is: "hmm let's add a band-pass filter between the receiver and the buzzer calibrated on TX beacon frequency, so I will only ear the signal when we receive this frequency". Wrong. By definition, noise contains all frequencies, and if we add a perfect band-pass filter, we will hear only one frequency instead of a noise. Worst, we may not be able to distinguish the signal.

Example with 2 audio files: noise + intermittent 500Hz signal and the same with a 500 Hz band-pass filter. 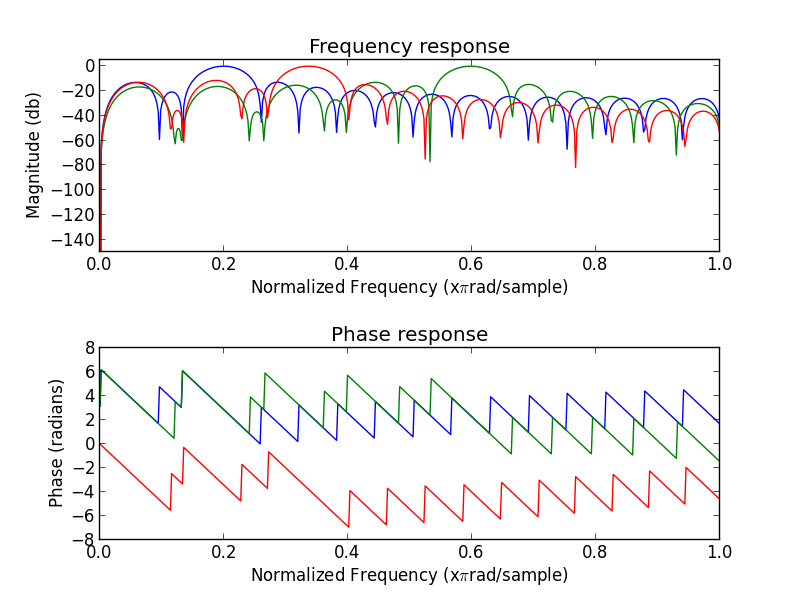 Run the script as following:

The script also generates the code of a C function to be copied in the AVR program. People used to program on AVR may be surprised that the device has enough power to apply 3 different filters (order = 32) on a signal sampled at 5Khz. Indeed, this is usually a work for a DSP!

The trick here is that the input signal is 0 or 1. So we can completely remove the need of multiplication to apply the FIR filter:

We store the 32 previous sampled inputs in a 32bit integer, so the code is:

We will see later in the article that the simulator shows that we have enough CPU power.

Listen and view the result

The same code can be compiled for AVR but also for a linux host. Thanks to this, we can test the effect of the filter on a real audio input. Four WAV files have been generated. They are sampled at 5Khz 16 bits, and each sample is either -32768 or 32767, simulating a 1 bit sampling (like the output of the DRA886RX):

These files are our reference test inputs.

Depending on how the code is compiled, it will use one of these files:

A script output_to_audio.py is used to display the result, and save the output of each filter (fond, harm1 and other) in a separate WAV file.

In the figures below, the top graph represents the output power of each filter. In blue "fond1", in green "harm1" and in red "other". The bottom graph displays the output of the "signal detector". When the green line is 500, the signal is detected.

To generate the images, start gen-img.sh. 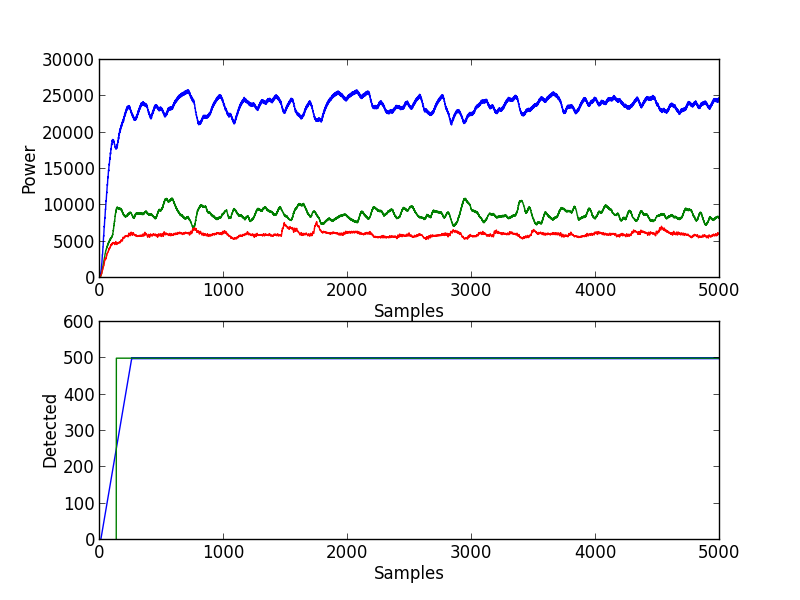 Filtering the tone with some noise 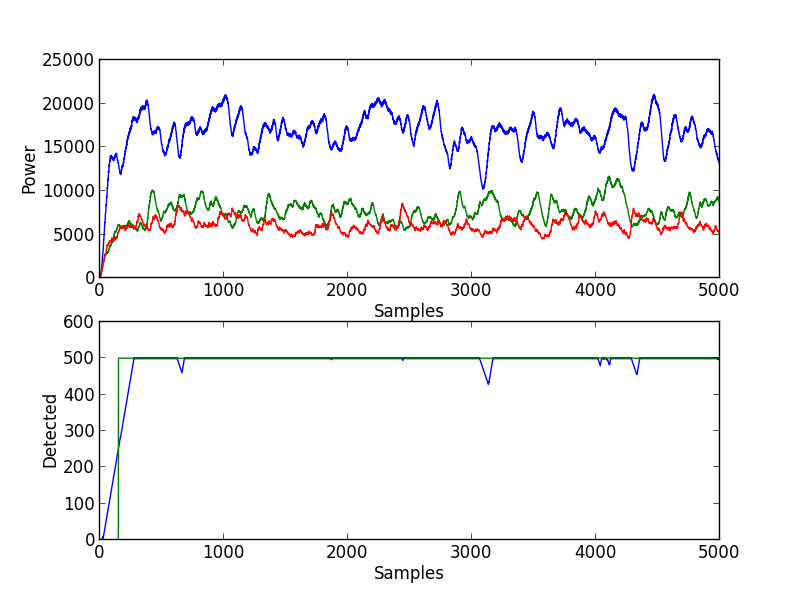 Filtering the tone wich a lot of noise 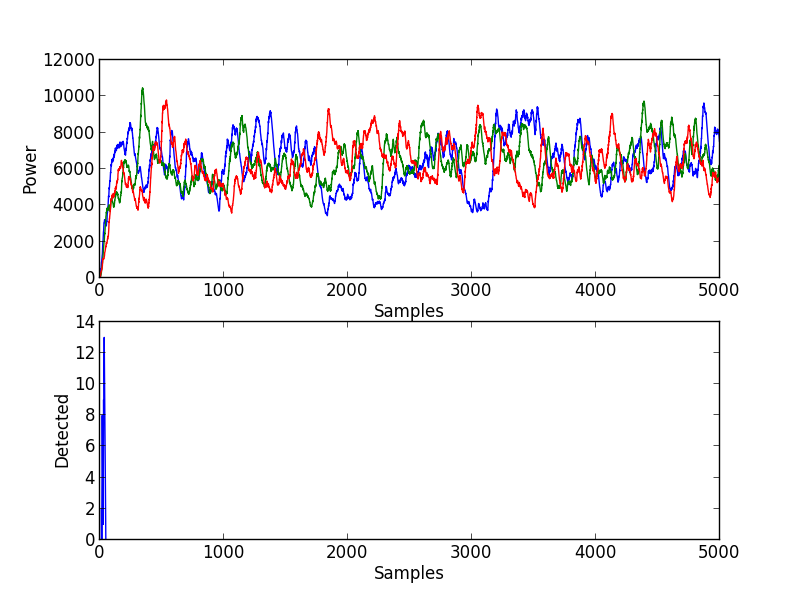 We can check that the program will run correctly on an AVR by using a simulator. We simulates an ATmega128 because the ATtiny45 is not supported by simulavr:

Then we add a breakpoint somewhere in the loop, and do several "cont". The simulator displays the cycle value each time we go in a breakpoint.

We measure between 450 and 750 cycles for one loop iteration, so it's large enough to have Fe=5Khz! Indeed, the AVR runs at 8Mhz, so the loop frequency is 10Khz in the worst case.

The receiver in action

The receiver can work in 2 modes:

In both modes, the LED is switched on when the signal is detected.

Thanks to serpilliere and will who helped me on this project.